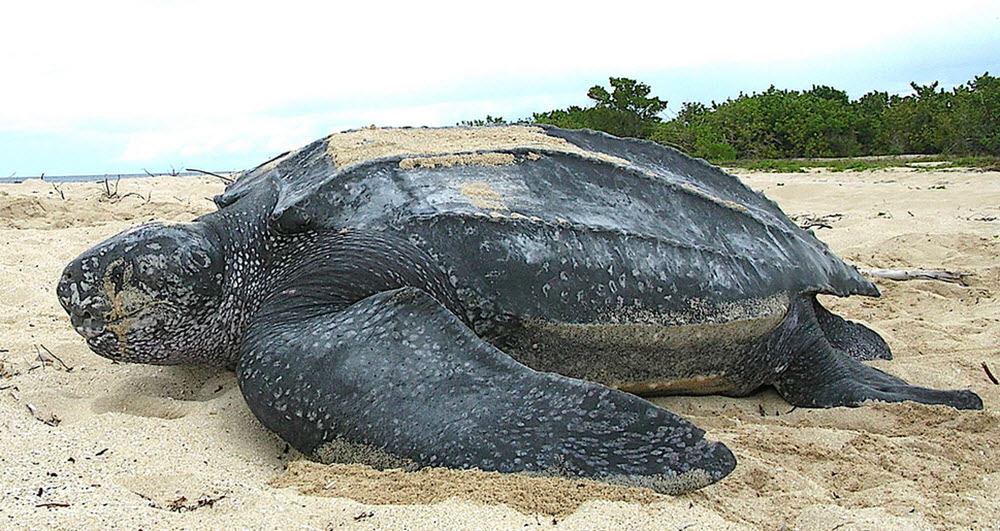 The Leatherback Sea Turtle is the oldest of all sea turtle species; it has been around for more than one hundred million years. They survived the extinction of the dinosaurs, and thrived until the last several decades when human interactions have taken a major toll.

The largest of all sea turtles, and one of the largest reptiles on earth, the leatherback turtle ranges in size from; four to eight feet in length, and weighs between five hundred to two thousand pounds. The average adult measures in between five to six feet, and weighs six to eight hundred pounds.

They have downward curving spines also known as, papillae in their mouth and throat which help them to capture and swallow their prey. Unlike, all other sea turtles, these giants do not have a carapace (shell), covered with hard scales, also known as scutes. Their smooth, leathery skin covers a supple matrix of bone. This specialized, flexible carapace allows them to dive to great depths unlike other species.

They can dive deeper than four thousand feet. Sperm Whales, Beaked Whales, and Elephant seals are the only other known animals that dive deeper; which is quite amazing given the smaller size in comparison.

Leatherbacks can consume twice their own body weight in prey per day, feeding exclusively on soft-bodied invertebrates like jellyfish and tunicates. Learn more about their diet. 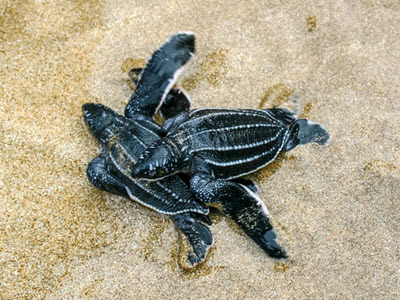 Leatherback turtles have a widespread distribution, and an ability to tolerate cold water due to thermoregulatory adaptations called gigantothermy, which allow them to maintain their core body temperature.

Leatherbacks have the widest distribution of all sea turtle species. They are found throughout the Pacific, Atlantic, and Indian Oceans. In the Pacific, their range extends as far north as Alaska, and south beyond the southernmost tip of New Zealand.

Researchers recently tracked an adult female more than twelve thousand miles using satellite telemetry, from Indonesia to Oregon, one of the longest recorded migrations of any vertebrate animal. In the Atlantic, they can be found as far north as Norway and the Arctic Circle and south to the tip of Africa. They are mainly pelagic (open ocean) wanderers but migrate to tropical and subtropical coastal regions to mate and nest.

The Pacific population has declined by over ninety percent in the last two decades; due primarily to entanglement in commercial fishing gear, particularly long lines and gillnets.

Their eggs are also consumed in many parts of the world. These ancient creatures are also vulnerable to ingestion of floating marine debris like discarded plastics. Plastic bags and balloons resemble their favorite prey, jellyfish, and when ingested may block their digestive tract, preventing them from eating.

Sea turtles are considered vulnerable all around the world by the IUCN Red List, and listed as Endangered in the United States, as well as internationally. As usual man is the greatest threat to the leatherback turtle. Commercial fishing is one of the greatest foes, due to the fact of the fish nets used in open waters.