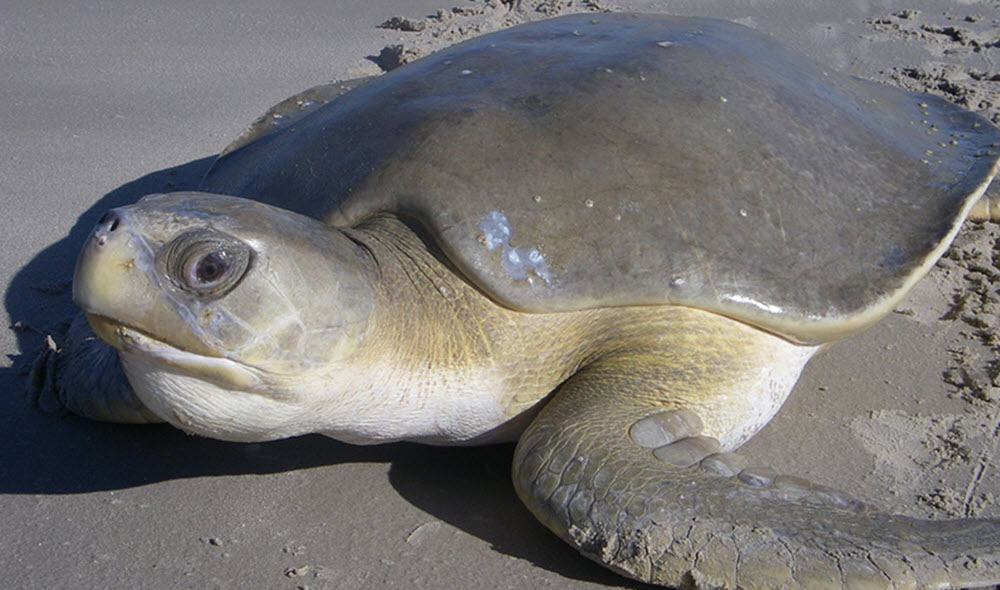 The Flatback turtle is named after its flat carapace, or shell, which is unlike the curved shell of other sea turtle species. The carapace is pale green/grey, in color with the outer borders distinctly upturned. An adult Flatback turtle can weigh up to two hundred pounds, and grows to approximately three feet in length.

They have the smallest distribution of all the species, and breed/ nest, only in Australia. Full grown flatback may weigh up to 90kg and reach a length of 1m.

Flatbacks are unique in many ways including their choice of habitat. Instead of clear, coastal waters, flatbacks live in muddy, inshore waters. Flatback sea turtles are indigenous to Australian waters, and are not found anywhere else in the world. They inhabit the coastal waters of Western, Northern and Eastern Australia.

Flatback turtles prefer the shallow, soft-bottom areas close to the shore, or the inshore waters of bays. They usually will not venture past the continental shelf. In addition, no flatbacks have been found in coral reefs.

Flatback turtles are majorly carnivorous, (feeding on flesh), they eat a variety of sea cucumbers and crustaceans, including mollusks, squid, and soft corals.

The Flatback has the smallest geographic range of the seven sea turtle species. Their allocation is restricted to tropical regions of the continental shelf, and coastal waters of Northern Australia, Southern Indonesia, and Southern Papua New Guinea. They do not have an oceanic phase, or undertake long, open ocean migrations like other sea turtles, and are usually found in waters less than two hundred feet in depth. 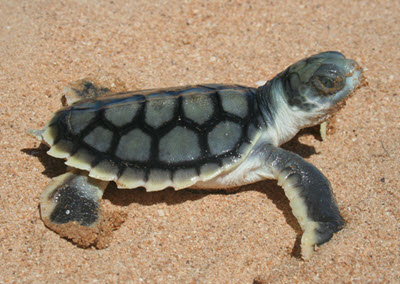 Breeding and nesting only occur in Australia, with the largest concentration of females nesting on Crab Island in the NE Gulf of Carpentaria in Queensland.

Primary nesting beaches are distributed from East to West across Queensland, the Northern Territory, and Western Australia.

The flatback nests up to four times per season, ranging in thirteen to eighteen day intervals. The nesting season in Queensland Northern Territory is from October through February, but it may nest year around in Northwestern Australia.

Although they lay relatively fewer eggs than other sea turtle species, relative to body size, the flatbacks lay the largest eggs of the sea turtles. An average egg for a flatback weighs 2.7 oz, which is about the same as that of the huge leatherback sea turtle. Their eggs have been described to look like what one would imagine a dinosaur egg to resemble. Due to the large egg size, flatback hatchlings are the largest of all sea turtle species.

The Flatback sea turtle most common predators are feral dogs, saltwater crocodiles, monitor lizards, foxes, sea eagles, dingoes, rats, pigs, and inshore herons.
Like other sea turtles, they are endangered by predators and a number of human activities, including fishing and housing developments at coaster areas which have destroyed their habitats and nesting grounds. Fishing activities have been responsible for the death of a lot of Flatbacks as they are mistakenly caught in fishing vessels.

Flatback sea turtles are listed as, vulnerable under the Australian Commonwealth’s Endangered Species Protection Act. They are listed as data deficient by the IUCN Red List.